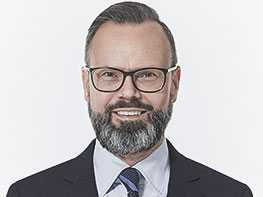 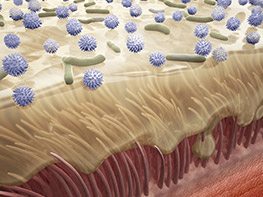 The cilia in our breathing passages move like grass in the wind. They are coated with a layer of thick mucus. Together, they protect the body from invasion by disease-causing pathogens. 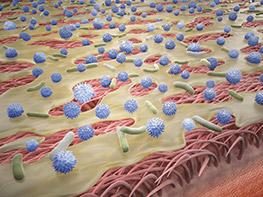 When overly dry air enters the breathing passages, the mucus layer flows less easily and is more easily penetrated by pathogens, leading to a weakening of the immune system's defenses.


The winter season is cold and flu season:

The health risks of dry air

Why do most colds occur in the wintertime? Scientists trace the cause to low relative humidity in indoor spaces.

We spend up to about 90% of our time indoors — probably even more in winter. That's exactly the time of year when heated indoor air has very low relative humidity. To understand why, note that warm air can hold much more moisture than cold air can. When cold outdoor air is heated up, its capacity to hold water will increase. The relative level of moisture in the air therefore drops, as you can see using a hygrometer. Even during a mild winter, the differences between indoor and outdoor air are significant.

However, the air that we breathe in must arrive in the bronchi at 100% humidity. On the way there, the air is humidified mainly by the nose, and to a lesser extent by the mouth, throat and windpipe. The cilia along the entire airway, together with the mucus that coats them, are part of an ingenious self-cleaning mechanism. The cilia move back and forth in unison, like grass in the wind. They have a sticky layer of mucus at their tips, which helps to slow the entry of viruses, bacteria and allergens into the body.

The movement of the cilia transports mucous secretions and all unwanted invaders towards the larynx, where they can be coughed out or swallowed after clearing the throat. In the nose, the movement of mucus is downwards towards the larynx, while in the bronchi, mucus moves upwards. With a good level of humidity in the air and proper functioning of the mucous membranes, all harmful substances can be eliminated from the airways and rendered harmless within 5 to 30 minutes

Damage to this self-cleaning mechanism caused by dry air can lead to increased risk of disease!
Rough skin and dry eyes aren't the only problems caused by overly dry air. The effects can also include damage to the ingenious mechanism that protects your breathing passages. Your mucous membranes dry out and contract, becoming tough and limiting the movement of the cilia, so that the layer of mucus no longer moves. Defense systems based on antibodies and antigens are also disrupted.

A video at Youtube.com shows how the self-cleaning process works. For example, a study has shown that asthma sufferers — representing some 10% of all children in Germany, and 5% of adults — are unable to add enough humidity to the air they breathe in. Humidification can bring them relief for their asthma symptoms.

On their website, Kindergesundheit-info.de, the German Federal Center for Health Education recommends that anyone who comes down with the flu should use a humidifier and drink plenty of fluids.

At normal room temperatures, people are most comfortable when the relative humidity of the air is between 40 and 60 percent, according to Dr. U. Marmai (professor emeritus, Dr. Ing. habil.). Proper humidity levels strengthen the body's defenses against disease-causing invaders like bacteria and viruses, and help to reduce the effects of asthma, allergies, and infections affecting the airways.